Alzheimer’s disease (AD) is the most common form of dementia, with prevalence progressively increasing with aging. Pathological hallmarks of the disease include accumulation of amyloid-beta (Aβ) peptides and neurofibrillary tangles in the brain associated with glial activation and synpatotoxicity. In addition, AD involves peripheral and brain-endogenous inflammatory processes that appear to enhance disease progression.

Our ongoing studies, using animal models of Alzheimer’s disease, unveil the inflammatory role of microglial subsets, particularly those holding a dialogue with peripheral leukocytes, in the disease process. 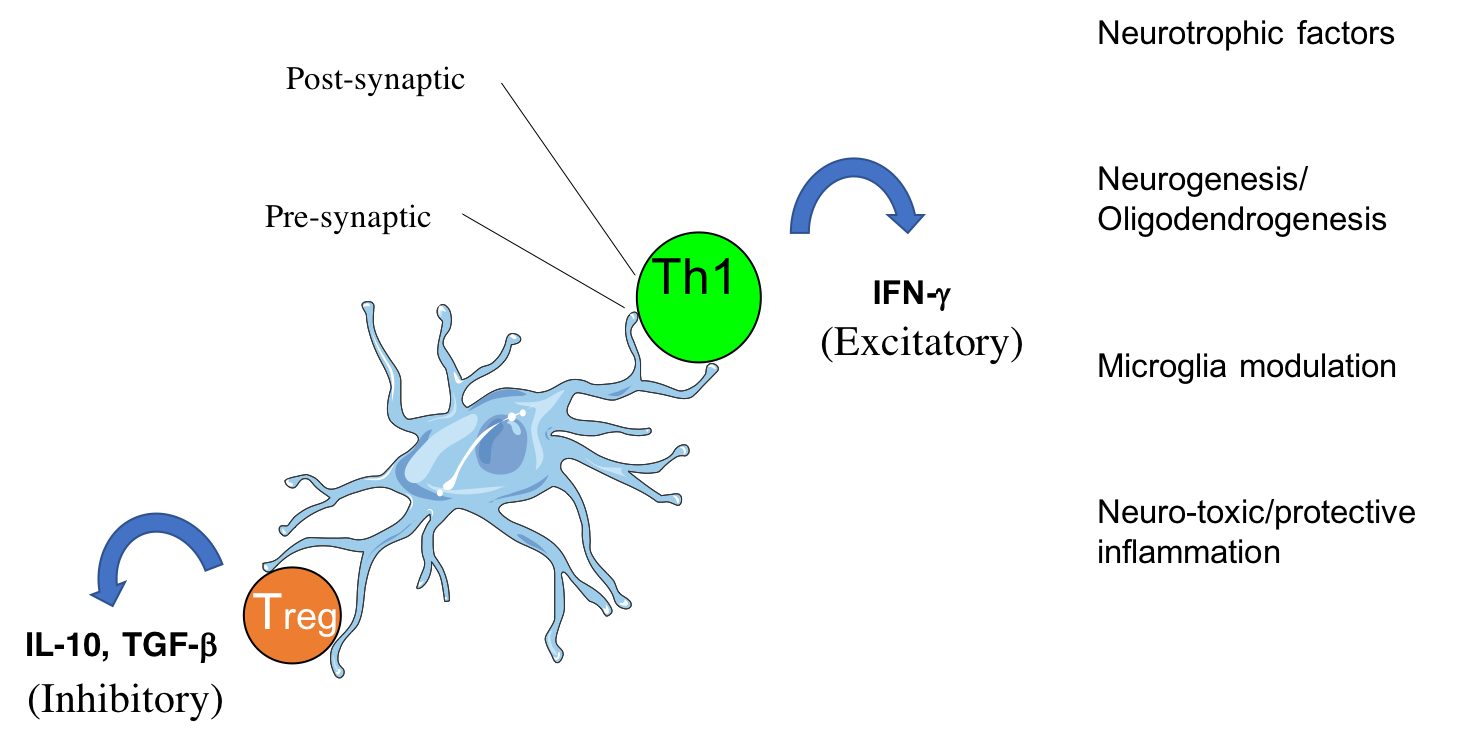 In addition, we study how the activation of astrocytes, being key modulators of the blood-brain-barrier and the neuronal network, impacts the disease process. 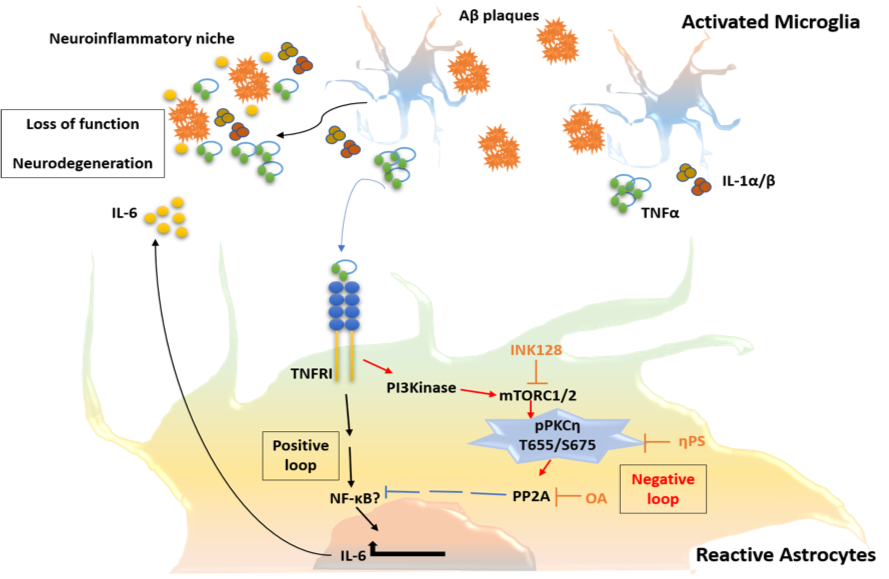 Apart from activation of an innate immune response in the brain, more than a decade ago a new therapeutic paradigm has emerged for AD, namely the activation of the adaptive immune system directly against the self-peptide Aβ, aiming at lowering its accumulation and neurotoxicity. This was the first time that a brain peptide was used to vaccinate human subjects in a manner similar to classic viral or bacterial vaccines. The vaccination approach took several turns, from initially active to passive and then back to modified active vaccines. As the two first approaches to date failed to show sufficient efficacy, the latter is presently being evaluated in ongoing clinical trials. In the review (CD4 T cells in immunity and immunotherapy of Alzheimer’s disease. Immunology. 2013), we summarize the immunogenic characteristics of Aβ in human and mice and discuss past, present and future Ai-based immunotherapeutic approaches for AD. We emphasize potential pathogenic and beneficial roles of CD4 T cells in light of the general decline in T-cell responsiveness evident in aging. More recently, the studies by Fisher et al., 2014, Strominger et al., 2018, Mittal et al., 2019 and Eremenko et al., 2019, provided mechanistic insights to the migration of CD4 T cells into the choroid plexus and into the brain parenchyma and highlight implications to brain immunity and repair. Current work is devoted to further understanding the dialogue between the immune system and the brain and to generate immunotherapeutic T cells as targeted drug-delivery vehicles. 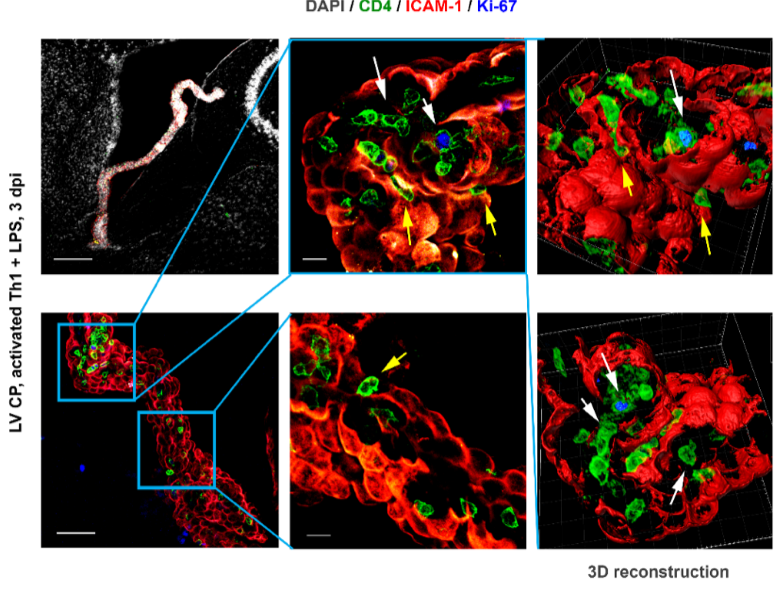 The choroid plexus as a lymphoid-like structure
(Strominger et al., 2018) 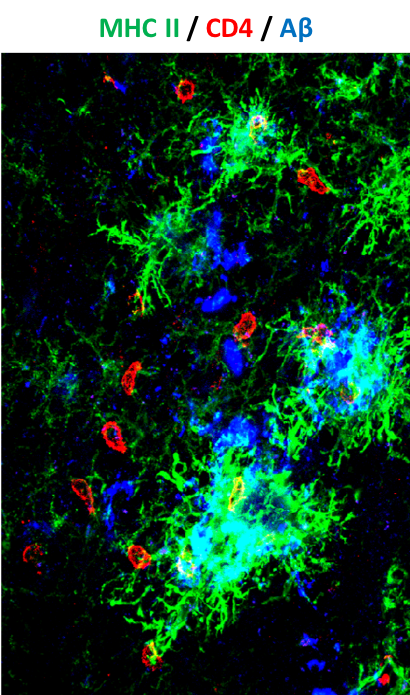 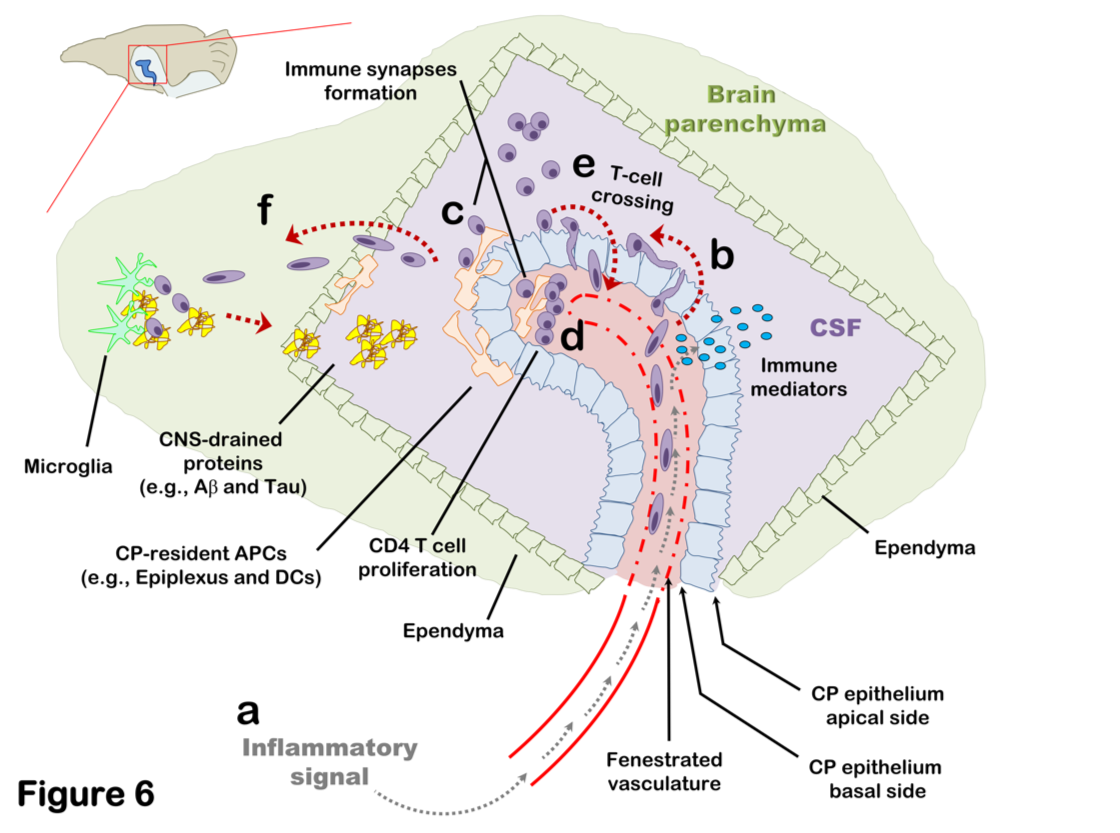 Among the many possible aging-related factors involved in the development of age-related diseases, senescence of the immune system may significantly enhance inflammation and neuronal damage in the brain and thus facilitate cognitive decline. A direct consequence of immunosenescence is the increased frequency of systemic infections and, in fact, many who die with AD have previously suffered from a severe infection and/or chronic inflammation.

While chronic brain inflammation progresses throughout the disease, the specific arm of the immune system, i.e., brain-specific lymphocytes, may also be stimulated. In contrast to previous assumptions, our findings in people with AD demonstrated that a specific immune response to A-beta is indeed significantly induced in both elderly individuals and patients with AD as compared to middle-aged individuals (Monsonego et al., 2003). The nature and role of this immune response to A-beta is yet to be investigated, and may result in new diagnostic and immunotherapeutic approaches. More recently we have shown that aging results in the accumulation of effector CD4 T cells exhibiting extremely dysregulated functions (Harpaz et al., 2017). Since these dysregulated T cells may significantly impact inflammatory processes in the brain of people with AD, in collaboration with Prof. Esti Yeger-Lotem and Prof. Nir Friedman we initiated a single-cell RNA analysis of leukocytes to reveal how aging impacts the landscape of lymphocytes as a key process that may underlie declined immunity and chronic inflammation in the elderly (Elyahu et al., 2019; Elayhu et al., 2020). Current research aims to further reveal the cellular and molecular characteristics of dysregulated CD4 T cells in aging and neurodegenerative processes both in human and in animal models. 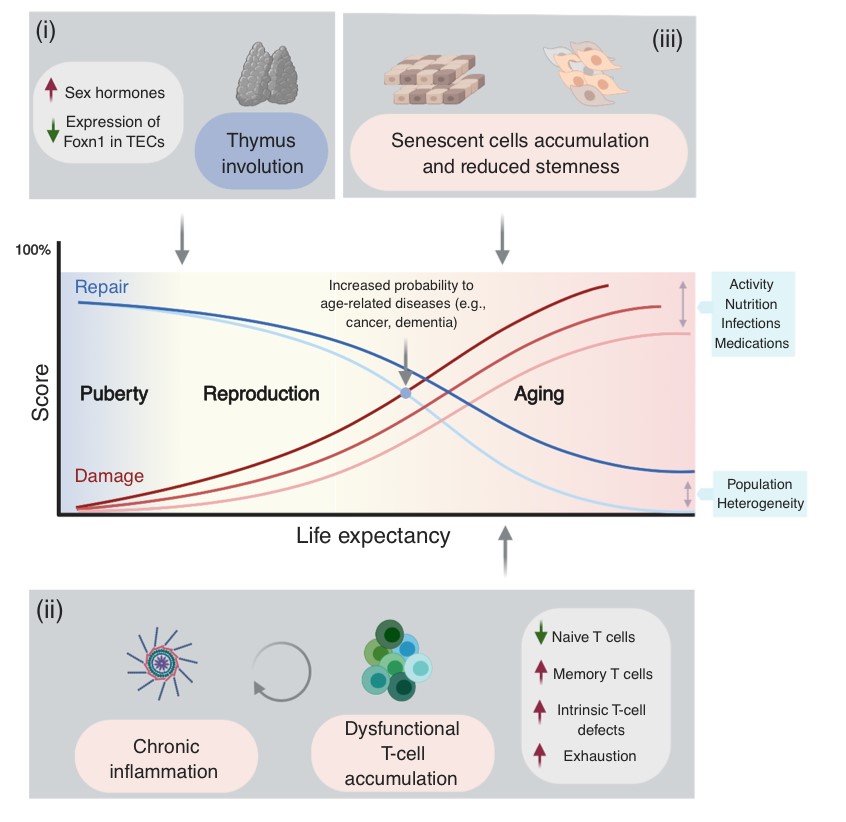